Chai from the Subcontinent – the smarter version… 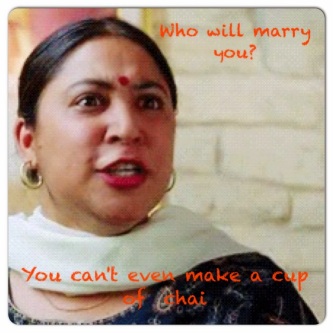 Chai latte is no chai. Yes it is delicious, but far from making an impression on a chai purist. If you are one you already know what I talking about and if you aren’t well this post is just for you. This post is also for all my Indian girlfriends. After all for an Indian mother there is no bigger worry than if her daughter cannot make a cup of tea, I mean after all who will marry her? So read on girlfriends and chai enthusiasts.

Chai as it is known in the subcontinent is another word for tea, which is derived from Mandarin Chinese word chá (茶).  I know right we have so much to thank the Chinese for!! Chai or popularly known as masala (spiced) chai is traditionally a sweet hot tea made from spices and milk to enrich it.

I was first introduced to chai when I was about 12 and there has been no turning back since. On a cold winter morning in Shimla, where I was visiting my Beeji (aka Grandma) and Massi (aka Aunt), I suddenly found myself surrounded with the beautiful aromas of the black tea leaves bubbling away on the stove and the sounds of the mortar and pestle crushing the intricately fragrant cardamom. Before I knew it in minutes emerged this cup of everything that is good in the world, my first cup of chai.

There isn’t one perfect time or occasion to indulge in a cup of chai. I religiously need a cup of chai to kick start my morning, at least another two or three cups to get through the day and you know what you can drink it guilt free because dude its chai not coffee.

In a tea pot add the tea bags. I use the tetley extra strong tea bags. Now add crushed cardamom, cloves, cinnamon and ginger. Add hot water and let the tea brew for about two to three minutes. Once brewed add milk depending on how strong or milky you like your tea.

Finally season with sugar or honey. I normally dont sweeten the tea as I believe it takes away the flavour of all the other ingredients. So if you can avoid sweetners, please do.

There you have it!! Your cup of everything good in the world, your cup of chai.