If winter had a fragrance, this would be it…

There’s a real chill in the air these days. A perfect reason to stock up on vegetables and make soups to last for days. After all there is nothing more comforting than a warm bowl of soup on a cold night, watching Netflix wrapped up in a blanket.

I am a big fan of combining different vegetables and spices whilst making soup. Take this soup for instance, pumpkin and carrot are combined with cinnamon and ginger. Now if winter had a   fragrance this would be it. Cinnamon brings out the sweetness in pumpkin and ginger, while ginger gives the soup a really earthiness. I don’t even have to begin to tell you the health benefits of these ingredients. Let’s just say it’s like winning a jackpot of good health.

So without further ado here’s the recipe. 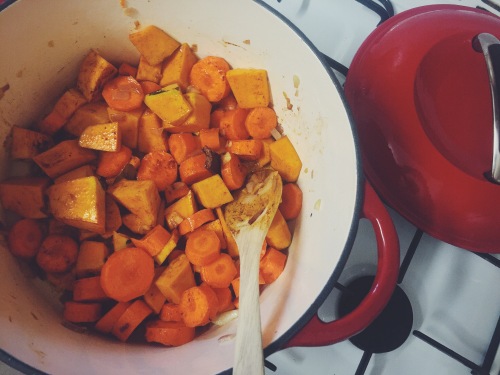 Now add pumpkin and carrots, followed by all the dried herbs and spices. Mix well, cover the pot and cook on a medium heat for five to seven minutes.

Add water or stock, cover the pot and let the soup simmer for 20 to 30 minutes on a medium heat.

To prepare the garnish, mix olive oil, sage and smashed ginger in a skillet. Heat until aromatic. Keep aside.

Your lip smackingly delicious soup is ready to be served. Ladle a generous serve into a bowl, glaze it with the sensational sage and ginger oil, add a dollop of sour cream or Greek yogurt and finally top with toasted sesame seeds. Serve with some toasted sourdough bread. Aaahhh!!!! Heaven.

4 thoughts on “Pumpkin and Carrot Soup”